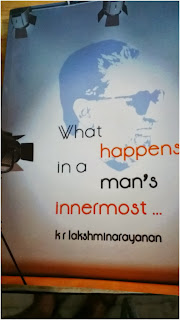 If you like the preview, the book is available at Amazon.com, Flipkart.com and  http://www.homeshop18.com.

A preview of my autobiography: ‘what happens in a man’s innermost...’

1. Feedback
Very unconventional in text and texture, the autobiography is an invitation in two languages, reads great, was able to relate to most of it.
Dr. R. Narasimhan

Prof Lakshminarayanan’s autobiography is interesting and lucidly written. I feel it is worth to have this book in one’s hands to read as it exposes him/her to a variety of subjects with sincerity.
Prof. S Muthukaruppan

Mr krl, a ‘true’ bilingual, foregrounds the difficulties and the struggles, captures them very well and will be a source of inspiration to many like him.
Geetha D.

This is the story of a man who has lived a full life and enjoyed and cherished each moment, who sees his life as valuable because he’s had the will to make it so.
Susan Jacob

2. Blurb
Prof. Lakshminarayanan’s ‘what happens in a man’s innermost...’ is not the conventional autobiography in the sense that it’s not a chronologically-expressed chapter-wise bundle. It’s a unique presentation of engaging and exciting experiences in prose and poetry (published and unpublished) in two languages.  In all the six segments, he comes through as a human, a relative, a professional, a critic, a friend, a subordinate.

The autobiography brims with the proof of his concerns and convictions about teaching, learning, training, about what life has offered to him—through his ‘dedications’, ‘getting to do things’, articles, papers in English and poems and nuggets in English and Thamizh (Tamil).

3. What you’ll find here
what happens in a man’s innermost... expresses itself through dedications,
a note, getting to do things, pieces published in the States, India and Ethiopia, papers presented and unpublished pieces.

I’ve expressed myself in both English and Thamizh which were, to begin with, a third language and a second (Thelugu is my first) and which have been my first for the past five or six decades. One fourth of this ‘creation’ is in Thamizh (See the twentieth, twenty-first and twenty-third under ‘unpublished’.)

Dedications (pages 1—12) open the door, slightly ajar (from my statement on the page previous to this) and let you in for a look.

a note (page 13), a picture hanging on a pedestal in your natural eye path (to your left), lets you get the hang of  how the autobiography came to be.

Getting to do things (pages 14—43) lets you move around the hall, take in the ‘pictures’, see and read the images of ‘me’ as a child, an adolescent and an adult.

A bird’s eye view of the published pieces
I’ve had published 14 articles, 4 letters and 2 poems. They project problems and suggest solutions.

One poem, published in Ethiopia, accentuates the sentiments of a smoker. The other one, published in India, highlights the excitement over the meeting of minds.
Three articles and two letters that form the first set showcase me as an English teacher who thinks beyond the classroom. They express a deep concern for the well-being of learners who learn English as another’s language. They point out the defective logic inherent in the syllabuses through which learners are led. They
argue for a serious rethink—which language skills to focus more attention on and put more than sufficient effort in. Of course, these articles reflected the ground reality of the 1970s and 1980s. Yet, even in today’s scenario, like then, the reading skill is as important though listening and speaking have now become essential skills as well.

Four articles and three letters that form the second carry my analysis of and views on the reading skill in its own right, internal assessment, the notion of‘fail’ and ‘pass’, the need to enrich Thamizh vocabulary (so the language can become the medium of higher education), fundamental changes in teacher training.
Six articles that form the third are a mixture of reality and fantasy.

Note:   For copyright reasons, you’ll find only the ‘essences’ or re-write-ups of the published pieces in the first and third sets and of three letters in the second set.

Unpublished pieces
(1) The first five pieces are figments of imagination, (2) the sixth talks about factors affecting learning, the eighth is a checklist for teachers to assess themselves, the sixteenth is a checklist for college faculty (3) the seventh is an attempt at indicating an (apparent?) contradiction in Lord Krishna’s messages to us through Arjuna in the Bhagavath Geetha, a part of the Mahaabhaaratha,  (4) the ninth describes at length the weeds in the ‘cricket’ garden that have been  allowed to grow wild and permeate on-field behaviour, (5) the tenth is a critique of an English textbook from the point of view of classroom management, (6) the eleventh and the twelfth are critiques of the two Indian epics—the Mahaabhaaratha and the Ramayana, (7) the thirteenth briefly poses in prose (quite a number of poems in English and Thamizh dwell repeatedly on this theme) a fundamental question about ‘creation’, (8) the fourteenth and the seventeenth occupy themselves with some tricky aspects of lexis, syntax and usage of the English language, (9) the fifteenth and the twenty-fourthcomment on the care to be taken in the presentation of serials on a local TV, (10) the eighteenth is a critique of The Argumentative Indian, (11) thenineteenth and the twentieth with poems in English and Thamizh form amajor chunk of my thought process and are a mixed bag on all kinds of themes, (12) the twenty-first is a transformation of a Thamizh piece into English, the fruit of an opportunity through a friend’s request, (13) the twenty-second and the twenty-third present in English and Thamizh crispy ‘reminders’, and (14) the last—the twenty-fifth—is a thesis on employee behaviour. The twenty-sixth echoes my view on English grammar.

4. Samples
1. Dedicated, among others,
to
my students
under whose studently affection I live

2. a note: how my autobiography came into being
what happens in a man’s innermost… is a cry. Of mind and heart. Of passion and commitment. Of pleasure and pain. Of logic and analysis. Of concepts and emotions. Of why and wherefore. Of bafflement and wonderment.

what happens in a man’s innermost… is a soliloquy. Not of a troubled soul but of a soulful soul. Thinking out loud.

what happens in a man’s innermost… is, i’m sure, not unique to this human being. whoever this ‘human being’ may be!

i know not where from. i only know they come.

With a clarity that surprises, with a purpose that questions, with a craze that defines, with an anger that belies belief. Thoughts that frantically search, thatmaddeningly beckon, that beggingly plead, that pleasure and pain, that bristle and bleed.

3. getting to do things (learn, teach, write, contemplate, survive)
getting to learn
page 21
She laughed, ‘Such broken stay wouldn’t satisfy the authorities.’ I said, ‘All right. I’ll make an appeal.’ She laughed merrily, shaking her head, ‘you’re a hard nut to crack, but they wouldn’t oblige.’ And there ended the matter.
Page 21-22
Of course I never received a reply. But I was told by a friend of mine who knew the Director personally that the latter would not grant exemption since he feared that the
Directorate might be consequently embroiled in legal battles for there could be a
spate of applications for exemption—this sounded so illogical and so bureaucratic.

4.
Page 27
getting to write
It was the morning of 21 January 1969 when I heard it. My ‘boy’1 brought me the news. The moment was one of shock and sorrow. Something I never could imagine could happen happened and he was so young.

5.
Page 32
getting to contemplate
I’m given to questioning traditional beliefs and practices prevalent among us
regarding religion, social status, or any field of human activity, for that matter.
You may have already had a glimpse of this in the previous pages. You’ll come
across several more in the pages to come.

8.
Page 51
English for Knowledge Purposes
Every society needs a language as a medium for meaningful and systematiccommunication and instruction.

9.
Page 53
‘Your poem is lovely. It’s an excellent piece for analysis in terms of ‘deviance’.

10.
Page 54
Reading Ability and Remediation
There are several reasons for such abysmal failure—some pedagogical, some practical.

Excerpts from paper presentations
12.
Page 75
Teaching English in large classes: a normative approach to performance parameters
These were the thoughts I was to present in a National Seminar on ‘teaching English in large classes’ organized by the British Council, Madras in June 1992.
However, this did not happen. I did something different. The essence of what I said when my turn came for presentation follows.

Excerpts from unpublished pieces
14.
Page 105
A two-minute silence...
I checked my movements and closed my eyes solemnly (how does one do it?) and began not to think of anything and observe silence mentally and thus pay my last respects to the departed soul. But it just wouldn’t work.

15.
Page 107
Confession
The school had had no precedent; no rule had been framed to deal with such
a situation, So my reporting to the HM would be futile. Even if punishment
were possible, what could he do? He is but an ass, bites or kicks. His bite is
as bad (or as good!) as his bark, and he takes pride in that.

16.
Page 110
Types
He never believed in perfection. Man, he would continue, has been living on
this planet (which is also imperfect) nobody exactly knows for how long,
and he doesn’t even know in which direction perfection lies. Perfection is no
truer than a mirage. So why bother about something that never really existed?
Let us live, he would beam and conclude, a moderate life.

18.
Page 161
A Critique of the English Textbook of the College of Engineering, Guindy

My letter chiefly addressed genuine concerns about learners’ problems and fruitful
classroom management in relation to the textbook in question, and I expected Prof. T. K. Subramaniam, the then H.O.D., to see them as such. Obviously, this was not to be, and Mr Bellarmine’s fears came true.

But I can understand when my assertiveness can be seen as aggression.

I had not sent a reply nor did I meet him in person regarding this for what could I say to a Professor who declared I had stooped ‘to the levels of discourtesy and indecency’ and I lacked ‘a sense of proportion’?

19.
Page 202
18. a reverie?
at your look
my eyes flew open
at your nearness
my heart raced
at your smile
my mind boggled
at your touch
my feet leaped
at your embrace
my soul was fused
is this what
life is all about?
Oh if this were only
not a reverie!

20.
Page 204
22. (dis)illusion
If my soul is only a part
my consciousness only a division
and there’s a corresponding whole,
why is the part apart?
why did the division come to be?
And if the part being apart
is only an illusion
why is this illusion?

Hope you liked what you experienced just now!

copies can be bought at Amazon and Flipkart.
Thank you for your patronage!