This piece is an example for learning to interpret a visual.

This was my response to a question I had to answer in my Certificate Course at CIEFL, Hyderabad in 1987.

The Cartoon I have chosen is in Tamil. 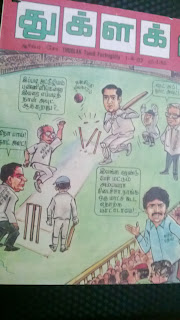 The Cartoon Scene:
A cricket Test Match is on. Balram Jakkar, the Speaker of the Lok Sabha, is the straight umpire and R Venkatraman, the Leader of the Rajya Sabha, is the leg umpire. Opposition parties are fielding. Rajiv Gandhi, the Prime Minister, is facing the bowling. The ball being bowled is the demand for discussion in Parliament about the President—Prime Minister relationship, especially in the light of the exchange of letters between the two P’s. An ‘opposition’ bowler bowls Rajiv. Jakkar declares the delivered ball a ‘no ball’ and thus Rajiv ‘not out’. Venkataraman from the other end says: ‘shut up! Not out!’ The bowler asks exasperatedly: ‘If you abuse your office in this fashion, how can we ever get him out?’ And Kapil Dev, the Indian Cricket Team Captain, thinks aloud: ‘If we had the benefit of two such umpires, we should never lose a match!’

Form
The Cartoonist blends into one two independent but similar situations that have arrested the attention and engaged the minds of the public for weeks. One is the long-drawn battle between the opposition parties and the Officers of both Houses of Parliament over the issue of President—Prime Minister relationship. The other is the marred India-Pakistan cricket series (Tests and Onedayers) besotted with poor and bad umpiring decisions.

The result is a high class coffee the public tastes with relish: decoction—political scene, milk—cricket scene and sugar—Cartoonist’s values. It’s his original focus that makes us laugh and think.

Overall content
Situation One—background
It all began with (at least as far as Parliament and the public were concerned) when the President asked for clarifications regarding the Postal Bill waiting his Assent. Then the cats began to come out of the bags one after another: leakages, veiled accusations.

Content (decoction)
Then ensued a constitutional furore and the resultant refusals in both Houses by their officious Officers for a discussion in Parliament about the President—Prime Minister relationship on the premise (pretext, the cartoonist would perhaps say) that the President was above and beyond discussion.

Situation Two
Background
The age-old rivalry between the two nations of the sub-continent reflects itself in cricket, too. Imran Khan came to India with his personal ambition to defeat India on her soil.

Content  (milk)
Bat-pad catches, lbw’s, caught-behinds, runouts had a controversial ring about them. The umpires, overpowered by their desire to exhibit impartiality, afraid of being criticised of being partisan, and harassed and bullied by the visiting team took their duties too seriously and too overzealously and erred and erred and went on erring that cost India the series and more than the series.

Unlike in the political scene, here the situation is inverse and hence all the more significant. Funnily enough, India, the home team, is the opposition party and Pakistan, the visiting team, the ruling party. This adds to the richness of the metaphor.

Sugar (Cartoonist’s values)
In both situations, the Officers of Parliament and the umpires are charged by the oaths and the positions they hold with the sacred duty of protecting their respective constitutions and the rights of people under the umbrella of their authority.

Whether it be overzealousness or personal considerations, the fact remains that they have betrayed the trust, they have sided with one group, they have failed miserably in the discharge of their duties, they have eroded people’s confidence in the very system that forms the foundations of national philosophy and thus been responsible for the consequent loss of faith in that system. They have committed the crime of inaction in that they have protected the ‘strong’ and wrong action in that they have suppressed the ‘weak’.

Conclusion
The humour is in Kapil Dev’s wishful thinking. The seriousness of today’s problem in democratic India is aptly heightened by Kapil’s dreamy observation and the bowler’s exasperated but rhetorical question.

Comment by the evaluator
Good but you could have commented more especially upon the choice of batsman, umpires and bowler.